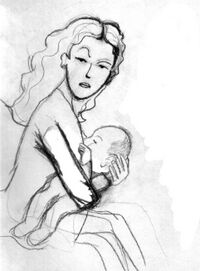 Mother's Milk is a ficlet written by Kara Wild in May 2003.

The story was originally a chapter from Wild's incomplete fanfic, The Winter Chill. Intended as a sequel to Working Girl, The Winter Chill contained large gaps in the narrative, and Wild was not convinced that she would ever have the time or energy to make either story into the novella it was supposed to be.

However, Wild did think that Chapter 2 of The Winter Chill was complete enough to share with a fellow fanfic author. She showed it to The Angst Guy, who urged her to release it as a ficlet. Wild obliged, and the fans' reactions were positive.

In Mother's Milk, Quinn notices that Amy (who is staying with the Morgendorffers for the week) is keeping bottles of her breast milk in the refrigerator. She reacts with horror as her aunt pours some breast milk into her coffee, claiming that it is healthier than artificial sweeteners. Amy then dares Quinn and Daria to drink some of her breast milk straight.

Retrieved from "https://dariawiki.org/w/index.php?title=Mother%27s_Milk&oldid=11081"
Categories:
Cookies help us deliver our services. By using our services, you agree to our use of cookies.