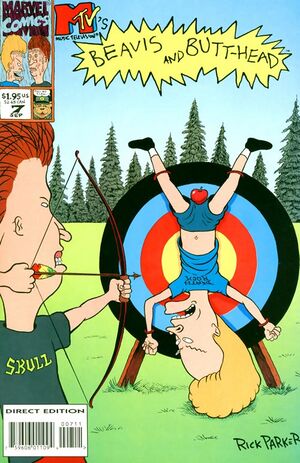 Beavis and Butt-head #7 was the August 1994 issue of the Beavis and Butt-head comic. All strips and features were drawn by Rick Parker (art and lettering) with colours by Rob Camacho, with the writing provided by new writer Guy Maxtone-Graham; Glenn Eichler was consultant.

Mr Anderson's sexy, skimpily dressed niece Robyn is visiting, and Beavis and Butt-head are making sure to get a good eyeview. Not understanding the concept of "niece", Butt-head theorises Robyn meant to go to the address of "two young studs" ("we gotta get one of those address thingies!" says an inspired Beavis) and hits upon a truly brilliant idea: "if the chick is, like, next door, then we should go, like, next door". They reach the Anderson's, only to get into a fight over who'll do the talking, who'll do the making out, and who saw her first (Beavis claims he thought of her first) until Robyn answers the door - embarrassed, they each try to make the other look responsible for the fight and claim they're not really from Highland and won't be as cool as people who really are.

After hearing the Anderson's are off playing bridge, they try to "trick" Robyn into believing they need one more for strip poker ("just the two of us is getting boring," says Beavis); Robyn informs them that the very concept of seeing them with less clothes makes her sick, and when they use that to get her to play Doctor, she slams the door and yells at them to play with themselves. (Butt-head protests Beavis already has) That, however, is when Butt-head has a brilliant new idea: set up a lemonade stand with "Free drinks for chicks" and disguise themselves with fake glasses and noses so she'll think they're someone else. 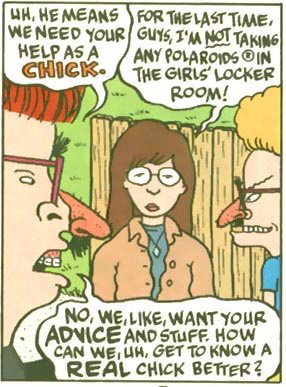 Robyn soon comes out, mocking the guys when she says she used to have a stand when she was a little kid ("Uhhhh... mine feels littler already" remarks Beavis). When Beavis 'blows their disguises', the two start fighting; when Beavis calls Butt-head "fartknocker", Robyn starts laughing and Butt-head protests Beavis is a fartknocker, he's Butt-head (she thinks he should have stuck with "fartknocker"). She takes pity on them and starts drinking lemonade... just as Beavis boasts how the lemonade is hot because he likes to BOIL BOIL BOIL stuff! ("Preach on, Brother Beavis!") She coughs and splutters spit everywhere - the guys mistake this for "swapping spit" - and physically tears into them; as they're battered, they try to remember what Daria told them to do and inform her they'd like to see more of her ("we wanna see the naked parts!")

After a brief encounter with Mr. Van Driessen boring them about birdwatching ("huh huh he said breasted. And then he said chicks"), they borrow his binoculars - Butt-head has just had an idea that they can become peeping toms, which Beavis wonders if it's anything like peeing. ("It's better, dude!") Sadly, their attempt at peeping sees them stare at Mr Anderson's butt thinking it's Robyn's jugs, and after they realise this with horror, Robyn calls the police to report them. They're quickly taken to court and sentenced to six weeks at an all-boys summer camp - and sentences suck! Beavis hates grammar!

The lads are forced into the bus to Camp Lackawood by a police officer (the same one from #1 and #3), who also decides he likes their TV and decides to "impound" it. The disgruntled duo end up at a forest camp run by a man dressed up as and talking like a very fake Native American ("what a dork!"), and enjoy ripping the piss out of his fake Indian chatter until the man bursts character and threatens to scalp their butts if they don't shut it. Beavis reassures him he won't have to, they'll wipe at least once a week while at camp.

Things go off to a bad start when "bug juice" is passed around - which is the name for punch at Lackawood, except Beavis and Butt-head eagerly talk about the time they really had bug joice, and get into a competition about how ate the biggest worm. (Beavis ate one that tasted like roadkill, and Butt-head agrees "roadkill rules!") They swiftly backtrack when they realise how disgusting that is, Beavis claiming it didn't taste like roadkill. Sick of dealing with them, the camp's head tells them to go on a "snipe hunt": going out into the woods at night when it's raining and staying there until they've caught a snipe with their sack. "WHOA! That sounds pretty cool!", Butt-head thinks, but after a few hours of wandering around in the pouring rain with no sign the snipe exists, Butt-head realises "this sucks!". Believing they may have been tricked, they had back to camp and decide to get revenge on the "Chief" by doing the hand-in-warm-water trick... only to decide to wet his bed "the old-fashioned way"...

Which ends their sentence at camp and gets them sent to jail instead. "This heap sucks, dude."