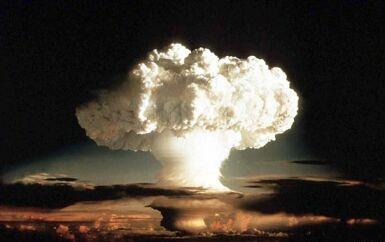 Apocalyptic Daria is a serial story written by Doggieboy in which Daria Morgendorffer and Jane Lane find themselves away from home at the start of a nuclear war. The story chronicles their attempts to stay healthy and alive while they journey to find their loved ones. Apocalyptic Daria is online at the PPMB in the Creative Writing forum, on the Sh33p's Fluff Message Board in the Story Hour forum, on the Icarus message board in the Tales From the Icarus Archives forum, and at Fanfiction.net.

It is the flagship fic in the Apocalyptic Daria franchise, which currently consists of eight titles.

Fics in the Apocalyptic Daria franchise[edit]

Daria and Jane, on a spur-of-the-moment road trip, are driving through West Virginia when they experience what can only be the after-effects of a nuclear detonation, quickly followed by evidence of a second explosion. This is the beginning of a limited nuclear exchange between the United States and China, which has been christened Black Saturday.

Traveling across the area, Daria and Jane are accosted by several men (including a serial rapist/murderer masquerading as a federal agent), scavenge for weapons and supplies in several places (a church, a deserted farm, a home where the owner is found dead in his living room), and eventually find a town where they encounter Linda Griffin, the mother of Sandi Griffin (a friend of Quinn's). From her, they learn that Lawndale has been evacuated due to the radiation from nuclear blasts over Washington, D.C. and Philadelphia, and that Quinn, along with Linda's family, are presumed dead in the explosions. After receiving supplies and promising to look for Linda's family as well, Daria and Jane set out on the road again, searching for their families.

After a number of encounters, including an attack by dogs in which Daria suffers an injury that may have been infected (there is also reason to be worried about the possibility of rabies), Daria and Jane come across the Carthage UMC Rescue Center, where they are given sanctuary and medical treatment. They also hear radio broadcasts about the catastrophe; both official government broadcasts and a pirate program by a rogue broadcaster called Dr. Neon, who provides off-the-wall humor and information the government and military don't want released to the public. Despite a series of rumors about their sexuality by a elderly female troublemaker, and Jane having to kill a man in self-defense after he tried to rape her (an event known only to one member of the church congregation), Daria and Jane are seen as contributing to the group. This is especially true after an attack by marauders, in which Jane performs gallantly under fire and saves the lives of several members of the church.

Jane is chosen as part of an expedition to check upon the welfare of a sister church in a nearby town; upon their arrival, Jane and the others find that more than eighty people have been sexually assaulted, tortured and executed by unknown persons. In a miraculous turn, however, a number of children managed to hide from the murderers, and are sent to Carthage before the churchgoers make the grisly, but necessary decision to burn the bodies of the dead.

After Jane and the others are back safely, four travellers - two children, a woman, and a man with a guitar slung over his back - arrive at the ruins of the sister church from the opposite direction of Carthage. They decide to check the area to see if it is safe to spend the night there, before they check out the next town down the road. The next day, they meet up with scouts from Carthage who take them back to the church. Daria and Jane go hunting with Martin Peters, and a squirrel pays the price for the girls' inexperience at hunting. Daria and Martin also seem to be become closer (especially in light of the dream Daria had the night before).

Upon returning to Carthage, Daria and Jane are shocked to discover that the man with the woman & children is Trent, who brings news that Helen and Jake went to search for Quinn after news of the Washington explosion. Distraught over the belief that her family has possibly perished, Daria leans on Jane and Martin for emotional support. She also becomes romantically involved with Martin, much to Mrs. Peters' chagrin; Mrs. Peters has a strong belief that Martin has a 'calling' to the church as a preacher, and that Daria's involvement will derail that in some fashion. She also has a heated arguement with Martin in front of several members of the church, where she demands personal information about his relationship with Daria. During their altercation, Mrs. Peters reveals that she and her husband had to marry because she became pregnant with Martin; this revelation doesn't sit well with the young man.

Supplies, brought in by a joint convoy of U.S. Army personnel and West Virginia law enforcement under the command of a Major Miller, bring up the spirits of the persons at Carthage. Daria and Jane speak with a West Virginia State Police officer and a Jewish chaplain on several matters including the disposition of Larry Carter's diary and on staying in the immediate area for possible word of any survivors. Jane tells Daria that Trent will be leaving soon, but she's staying at Carthage with her until the fate of the Family Morgendorffer is known.

A later convoy, made up of U.S. Marines and support personnel, arrive at Carthage to seemingly help restore order to the area. Those Marines are commanded by Colonel Kyle Armalin and they bring a passenger along with them: Helen Morgendorffer. After an emotional reunion with Daria (in which Daria is informed of Jake's death from a heart attack and the belief that Quinn perished at the Mall of the Millennium), Helen learns of her relationship with Martin. She is a bit leery of said relationship, due to concerns of his "emotional baggage" from the actions of his mother before her death. Helen also raises eyebrows when she encounters Trent; the momentary trepidation between the two leads Jane to wonder if they have slept together, but Pam asks her to not pry, as many persons have done things since Black Saturday that would not have happened otherwise, and it's better for all concerned to let things go.

It is revealed during the story that Col. Armalin and some of his men are there to permanently take care of any groups listed as "terrorists", possibly under the direction of DELPHI (Potentially represented by a "George Williams"). One such group some twenty miles from Carthage is wiped out by Armalin and his men. It is also implied that similar actions are taking place all over the United States.

Though he never appeared in the story itself when it was originally written, Tom Sloane does have an "appearance" in the narrative. In the PPMB topic "The 1,001 Deaths of Tom Sloane", Doggieboy wrote a scene in which Tom was a passenger in an airplane that crashed as it approached Pittsburgh. This is the downed airplane seen by Daria and Jane in Part 1 of the main story itself.

In Legion of Lawndale Heroes, the first conversation between Daria and Martin is eerily similiar to the first meeting at Carthage - including the fact that Madelyn Cooper is an officer at the United States Academy of Extranormal Studies, and that Martin has a slight crush on her that disppears upon meeting Daria.

Retrieved from "https://dariawiki.org/w/index.php?title=Apocalyptic_Daria&oldid=666"
Categories:
Cookies help us deliver our services. By using our services, you agree to our use of cookies.