Why's he so rude and reckless?

Bob is the name of a recurring background character (or "backgrounder"), given a name in Cafe Disaffecto by happy accident after fans found a seating chart was legible. He's in a number of Daria's classes.

Bob is a standard punk and in "Jane's Addition", you can see him at the Zon smoking and drinking despite being too young. The obnoxious DJ's of Mental in the Morning met with his visible approval in "Jake of Hearts". Bob even crashed Brittany's party in "The Invitation", driving a car at the time and likely without a license. No wonder he was put in O'Neill's self-esteem class! ("Esteemsters")

Despite all this wild behaviour outside of school repeatedly shows up at school behaving: he's on the yearbook in "The New Kid", dons a tux in "Daria Dance Party", supports a homecoming parade in "I Loathe a Parade", and even helps Mr. DeMartino pack up the classroom in "Is It Fall Yet?" and got invited to Britanny's part in "Groped by an Angel". Most at odds with his image and bad habits, he's one of the guys who buy the Fashion Club's newsletter in "The Story of D" (but don't read it). Was he always like this, or did the self-esteem class straighten him out at school while still raising hell outside?

Aside from his fellow party crasher in his first appearance, Bob has only ever been seen hanging with Burnout Girl and fellow punk-esque student "Angel".

Bob's arm tattoos change from episode to episode, even appearing and disappearing, as a result of animation errors strange forces or possibly animation errors he's using temp tattoos for his image.

He shows up in the timeline montage at the start of "Is It College Yet?" as a punk (shock!) in the 70s and 80s, both times cheering Kevin crushing a beer can. The second time, he shows it's a new era by having different coloured hair. 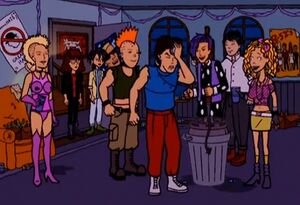 Bob's existence and name was first highlighted by The Angst Guy in late November 2007, at the Daria Fandom Blog II, asking if anyone had any ideas for him in fanfiction. However, it wasn't until late December 2010 that he first appeared in one: Charles RB's "God Save The Esteem", after the author saw TAG's part, portayed his an academically minded rival punk to Quinn's gang, who separated school from punk work.

He subsequently appeared as a major character (given the surname Morrison) in Legion of Lawndale Heroes fanfic Fugitive by Wassersauefer in early January 2011: here, he was depicted as a crude half-English guy (full named Robert Andrew Morrison) and a good friend of "Burnout Girl", and part of a family that combats supernatural and demonic evil. In the same month, he first appeared in The Excellent S's Lawndale Fighting Championship (surname Rollins), depicted as a "hardcore" wrestler who brings weapons into the match for himself (and others) to use. In later 2011, thatLONERchick would do both fanart and a fanfic under the title "He Shall Be Mine", shipping Bob with Daria.

From this point he was secured as a fandom creature.

He's been seperately shipped with Daria in Shiva's serial "The Punk and the Snark". In WellTemperedClavier's The Background Blues, Bob's stridently intellectual nature prevents him from communicating with the incredibly bored punks at school.

What helps him above all other backgrounders, apart from his distinctive look, is we actually have a name for him.

Bob-related entries at the Fandom Blog

Retrieved from "https://dariawiki.org/w/index.php?title=Bob&oldid=29361"
Categories:
Cookies help us deliver our services. By using our services, you agree to our use of cookies.