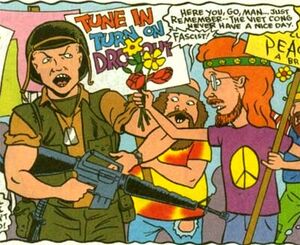 The Vietnam War has been linked to multiple Daria and Beavis and Butt-head characters & episodes, due to the time they were set: due to the war's significance in the US and the presence of a draft, it was very likely older characters like would have fought in it or be involved in protests during the 1960s.

Coach Buzzcut was in the Marine Corps during the war and saw combat. He's a firm believer in the theory that the war was lost because there wasn't "total support" back home: he ends up having a traumatised flashback to the war in "Go Highland" but not to the war itself, but to hippies protesting against him when he came home. This makes him angry enough to try and murder Mr. Van Driessen.

Driessen, as an aging hippie, most likely protested against the war. In the above flashback, he's giving Buzzcut some flowers and saying "just remember, the Vietcong never have a nice day". (As they're both the same age in the flashback to real life, this may be a fever dream and not a literal encounter.)

Jake Morgendorffer was almost sent to the Vietnam War after Buxton Ridge Military Academy. He escaped this because his father paid for him to go to Middleton College, making him exempt ("The Daria Diaries") - though in "My Night at Daria's", he claims in anger that he wasn't drafted because "the war was winding down". Everyone from his class at Buxton was sent to the war, and in a grim mood in "The Lab Brat" he admits he likes to think they all died there.

Kevin Thompson knows there was a Vietnam War but doesn't know when the date was. Anthony DeMartino snarled at him that "a lot of good men died" in the war and admonishes him to "get the CENTURY right" ("Esteemsters").

On the Lawndale Lions website, a bitter Mack said they'd been studying Vietnam and "the parallels between serving in that conflict and playing high school football are really quite fascinating".

Vietnam veterans among the one-off characters include Jim of Jim's Paintballing Jungle, the sheriff of Fremont (who has a photo of his platoon in his office), and Toby of Tokyo Toby's sushi resturant. Toby once insulted Jake for not fighting in the war ("My Night").

In the Daria Behind The Scenes Special, DeMartino's voice actor Marc Thompson said he "got it in my head that he was a Vietnam veteran".

It's common fanon that DeMartino was in the war and that his VOcal TIC and mannerisms may be down to PTSD. Nemo Blank's "Blast from the Past" is one example of his in fanfiction

Smileyfax's grimdark "My Best Friend" series has Jake as a veteran, and "Man of the House" shows he has recurring nightmares of it.

'Nam lurks in the background of C.E. Forman's "Fireworks": Jake is mistaken for a soldier, the hippy Keenak got out of the draft by failing his physical, and the characters mark the war's end.

Retrieved from "https://dariawiki.org/w/index.php?title=Vietnam_War&oldid=28977"
Cookies help us deliver our services. By using our services, you agree to our use of cookies.